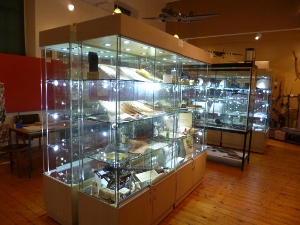 The current museum building was originally erected as a Baptist Chapel in 1852 by the “Strict Baptists” – the Museum was formerly housed in the old Weighbridge next to the Town Hall Annexe. The date is carved on the window arch above the porch. It was the first of no less than four churches built by the energetic and enthusiastic non–conformists of mid–Victorian Cricklade and continued in use until dwindling congregations led to its closure in 1937.

During the Second World War the building became a Womens’ Voluntary Service canteen for the armed services based mainly at surrounding RAF bases such as RAF Blakehill Farm and RAF Down Ampney.

From 1955 until 1984 the building again became a church – this time a Roman Catholic one (the Roman Catholics now worship at St. Mary’s Church, situated at the north end of the High Street; this church no longer being used by the Church of England).

In 1985 the building was purchased by Cricklade Town Council and leased to the Cricklade Historical Society for use as a Museum. It was officially opened in June 1986. The restoration work was carried out by the late Sidney Giles; a local builder.

Since 1985 the Museum building has been maintained by the Cricklade Historical Society for the benefit of the town and its tourists.